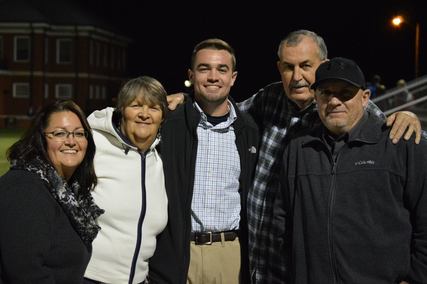 My name is Brandon Surber and I am a second year student in the Doctor of Physical Therapy Program at the University of North Carolina at Chapel Hill. I graduated with my Bachelor of Science in Athletic Training in 2018 from Emory & Henry College. I was born and raised in the small town of Saltville, Virginia. I decided to use the photo on the right for my introduction as is displays what is the most important thing in my life, my family. Without the people in that photo I would not be where I am, would not have had the opportunities I've had, and simply would not be the person I am. I owe all of my success up to now and into the future to them.

High School
Prior to attending UNC and E&H I attended Northwood High School (Saltville). During my time at Northwood I had the opportunity to serve in student government as secretary, vice president, and president. I had the opportunity to be an honor student at both Northwood and Virginia Highlands Community College (which I attended while in high school through the A. Linwood Holton Governor's School). I was honored to be inducted into the National Beta Club and the Phi Theta Kappa National Honor Society while receiving my academic letter. I had the opportunity to be a part of many great organizations such as the Smyth County 4-H Club (teen counselor), yearbook staff, foreign language club, Olin Mathieson Saltville Community Liaison Panel (student outreach advisor), special Olympics volunteer, and our weekly news broadcast team. I was also honored to be named the Salutatorian for my senior class in 2014. I also had the opportunity to do what I loved most, play sports. I was a member of the football, basketball, and golf teams lettering in all three and serving as a team captain for both football and basketball. This was where my interest in sports medicine and rehabilitation began. I actually sustained an injury leading up to my junior season that prevented me from playing football. This allowed me to play a season of golf, but left me with questions about my injury. We did not have an athletic trainer at the time and I did not attend therapy as I was told the injury would just "take care of itself". I began researching, one thing led to another, and a year later I was changing my mind from majoring in Engineering to majoring in Athletic Training.

​Emory & Henry
My time at Emory & Henry has been very interesting. Since starting in 2014 I have been accepted into the Athletic Training Program (competitive admissions process freshman year), served on the Athletic Training Student Organization (ATSO) as secretary (2016-2017) and President (2017-2018), attended state and district Athletic Training Conferences, conducted major and minor research projects, studied abroad with Habitat for Humanity in Trinidad and Tobago, been inducted into the Phi Eta Sigma National Honor Society and the Blue Key Honor Society, been honored to be a Dean's List Student, Observe at Duke University in the Orthopaedics Department, been honored with a nomination for Homecoming King, and been a member of multiple clubs including: ATSO, Blue Key, Strength and Conditioning, and Habitat for Humanity International. I have been very fortunate to have some great professors, meet great friends, and establish connections with students and faculty from E&H and many other colleges that I hope to keep and possibly work with as I continue into my academic and professional career. E&H has opened doors and created friendships that I feel I would not have gotten at any other institution. E&H and Athletic Training have opened my eyes to the field of healthcare and allowed me to realize what I want to do with my future and the opportunities that are out there for me.

Where I am now/future goals
In April of 2018, during my last semester at Emory & Henry, I passed my Board of Certification (BOC) Examination and, after receiving my degree in May of 2018, officialy became a Certified Athletic Trainer (ATC). I am very proud of this accomplishment as I dedicated four years of my life to preparing for this exam, but more importantly to becoming a great athletic trainer. Passing the BOC Examination meant that I officially joined the wonderful profession that is athletic training and set the basis for me to become a dual credentialed healthcare professional in the future.

As I stated before, I am currently a second year student in the Doctor of Physical Therapy Program at the University of North Carolina at Chapel Hill. Becoming a part of this program was not only a proud moment for me, but was a dream come true after a lifetime of wanting to attend UNC. Since my first visit, when I was five years old, I wanted to be a Tar Heel. Finding out that UNC has a DPT program only added to my desire to join the school. I am very fortunate to have been invited into the family that is UNC DPT and am looking forward to my next three years in this fantastic program. I know that I will have many great experiences, both clinical and other, and that I will be well prepared to practice as a physical therapist in the further.